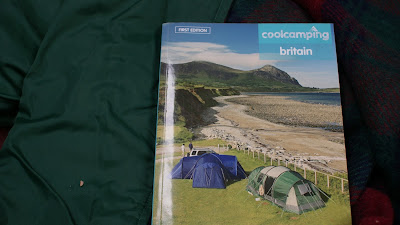 Page 298 may interest some of you!
Write up by Kevin McKelvie. 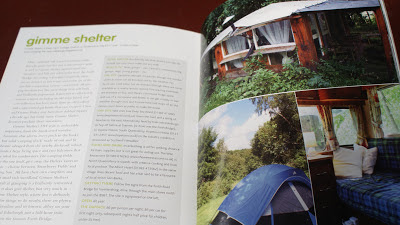 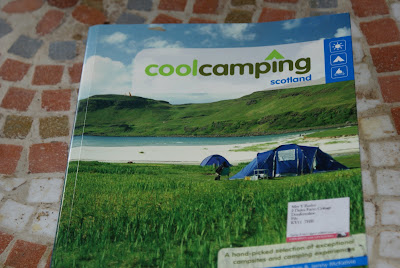 Keith Didcock, took photos to include in the spring edition of their book.
His photographs have also appeared recently in the Observer travel pages.

1.3.2010 edition of the Cool camping Scotland by punk publishing,
can be bought from W.h. Smith, Waterstones, Amazon (top 50 bestsellers), or from our gallery.

It is well written, researched and informed,
with stunning photographs
(some of our camp, page 44 and 47, by Keith Didcote whose photos appear in the Guardian, etc.),
amusing play on song titles on the last paragraph of page 46.
Mentions in 5 categories pages 11-15 and page 5/6.

Will Self: PsychoGeography
Saturday, 22 September 2007
My friend Marc believes that all that happens when you buy carbon credits is that a man rushes into a remote African village shouting: "Turn off de generator! Big man taking a flight!" But then he's a hopeless cynic – or is he? Marc's view encapsulates the reality of a lot of environmentalists' practice, which is that wealthy Western consciences can be salved by token gestures. Carbon trading schemes are absolute bunk in my opinion, a get-out-of-this frying pan card for arch-capitalists that will dunk us straight back in the fire.
"So, what's your solution then, smarty-pants?" I hear you growl from deep in your Saturday muesli; and the answer is: "I don't have one." I think the real objection to plane travel is more aesthetic than ethical: there's something increasingly vulgar about contrails, the vaporous bling looped across the wrinkled bosom of our ageing sky. It could be my own ageing – it could be the practice of too much psychogeography, but I also find the very experience of international – and especially intercontinental – jetting, far more disorientating.
Like some bolshie alien, resisting Scottie's ministrations, as he tries to beam me up to the USS Enterprise, it takes me days after the arrival to feel as if all my molecules have joined me, and I'm not simply a fizzing column of a man. Consequently, when I return home I don't even feel as if I've been anywhere. All of which is by way of a mea culpa, because the fact is that if plane travel is bling, I'm a top gangsta in the ghetto. This last year has been the worst carbon-emitting period of my life. I've been to South America – twice! The USA – same again! And been shuttled back and forth to the continent so many times I feel like a baby in a shopping trolley that's been stolen by a speed freak.
I'm not going to try to claim any of these trips were essential – they truly weren't. Things just ... sort of ... turned out that way. And nor can I promise to be a better stay-at-home next year – plans are already afoot. But what makes it seem all the more senseless, galling and shaming, is that the place I've most enjoyed visiting this year, is the woodland camping site of Chris and Yvonne Barley, at Inverkeithing, just north of Edinburgh.
"We're old hippies, you see," Chris explained when the boys and I pitched up to pitch – and I instantly felt right at home. "We moved up here 30-odd years ago from the Leeds area. We bought the cottage and woodland about 10 years ago, and began working on it."
The work they've done is to turn this little spinney – perhaps 15 acres in all – into a kind of sylvan boutique hotel for weary urbanites. Looked at one way, the woodland isn't anything special: a tangle of brambles, a stand of birch, some alders, sessile oaks and ashes. And in among them, grassy glades half-contrived, half-natural. A deeply rutted old Holloway, its banks twisting with tree roots, led up the slight gradient past an ancient mound. On the far side of our camping glade, Sweet Meadow, the land dipped down a steep muddy incline to a stream.
But there is artifice here – the woodland is subtly managed: the camping glades are connected by mown pathways; the underwood is half-cleared, leaving plenty of dead boughs ready to be gathered for camp fires, while the campfire circles themselves are artfully sited by rough-hewn cooking tables. There's a composting toilet-cum-washing up station built out of logs, and a tumbledown hovel full of straw bales for badger-watching. All in all, the Barley's 15 acres give you the easiest, calmest way of sliding gently into nature that I've ever encountered.
At night, you can hear the traffic swishing past on the M9, heading for the cultural asperity of Edinburgh, but far from violating the spinney's peace, for me, it only enhanced it. Once the boys had glutted themselves on toasted marshmallows and cocoa, and tumbled, smoke-blackened into their sleeping bags, I strolled the margins of the wood, looking across the wheat stubble fields to where halogen lights marched beneath the moon.
I love an interzone, a place that defies the easy certainties of place to present you with a realer confusion of rus and urb – the Barleys' campsite was a perfect example of this. And so what if the burning logs on the fire looked at me with sorrowful, blame-filled eyes, admonishing me for my long year of shameless jet travel? Like the Barleys, I too am an old hippie. And though I may have sworn off major hallucinogens for many a year now, it's at times like these, alone in a Scots wood, in the middle of the night, that I begin to believe in the existence of flashbacks
To find out more about Chris and Yvonne Barley's campsite, visit www.ukcampsite.co.uk or http://www.woodlandcottages.co.uk/

Posted by Woodland cottage and campsite at Wednesday, May 08, 2013

All clear for your usual bookings from now through early September. Just remember to bring your own water, logs etc. Thanks for all your kind support.

It should not affect your enjoyment but there was a fire in the woodland behind our cottage on 31.5.21. You would only see it for a few metres as you drive into the woodland. Then all is as usual. It did however stop the water supply in the woodland, so definitely bring plenty water. We have been allowed to clear a path in the driveway but eventually there will be a skip parked there for a week or so which will stop access but we’ll publish those dates. those dates. Also until we can remove the burnt trees at the entrance, there is a possibility some branches are unstable, so don’t let your kids hang around that bit or park your car there to have a look. Let me know if you have any questions. Yvonne

As we can only take a limited amount of regulars, speed in answering and finalising payment, is a factor in deciding which request to book we can choose. The more information you can supply with your initial enquiries, the better. You should include Names, ages, E.T.A. E.T.D., Along with agreement of terms like:- Taking all rubbish home, bring your own logs, sanitising gate.lock before use, No dogs, no visitors, etc. . Also last few dates of previous bookings. and if you can bring your own toilet tent or not.

Please bring your own logs, matches, kindling, etc. ( existing bookings of prepaid logs will still be honoured). For those of you without cars, just ask and pay in advance as normal. It is still no foraging for wood though. Thanks

We will remain permanently closed to the general public. We can only take a small amount of regulars and this is generally between 1st May to 31 August. (Ask if your dates are beyond that and we'll see what we can do, particularly for the camping huts).

New- 14.8.21 (Camping shelters) Your own gas, wood, pots and pans for Camping Cabins

Construct Hire (some call Glamping but these are stripped back to basics):- 1. Please bring your own wood, etc. for the wood stoves, we no longer sell logs. 2. Due to new calor gas supply difficulties, we will be phasing out the provision of gas and cooker. Please bring your own as you would for camping.(have you seen the Cadak camp cookers for …. Pizzas, crepes and everything). 3. To sterilise thoroughly after each occupant, we will only be able to provide a very basic shelter without the usual crockery and utensils. Provided:- table, chairs, beds, kettle. 4. Please note we cannot store your items between visits. We need to be minimal and simplify the contents and items we have to handle, move or sterilise. 5. We can no longer provide bedding for these buildings. 5. Please bring your own forks, plates, mugs, pans, serving dishes, cafetiere, chopping knife and board, bottle opener, spatula, wooden spoon, tea-towel, J-cloths, hand towel, oven gloves, gas and cooking stove, wash up brush, bedding, torch and lantern, etc. 6. We can no longer provide bedding for these buildings. 7. On departure, keys in cottage letterbox on double wooden gates Put wooden flag ( okay spoon) up. Thanks

Who can camp (only regulars).

We cannot take newcomers, groups, visitors or drop offs. Only a single family of regulars. Very limited availabllity and very much reduced footfall. When enquiring, please include the last 3 or 4 dates and where you pitched, along with acknowledging you can cope with the new conditions, like taking rubbish home, sanitising gate lock, etc., so we can try and add you to the list.

1. Entrance gate - Use the hand sanitiser/ or your anti-bacterial wipes, before using the padlock and bolt and water refil tap and latches to wash/toilet area. 2. Please take all your rubbish home including toilet bin type waste. 3. Toilets- Although we clean for your arrival, the toilets are not always exclusive, depending on government advice. Let me know if you can bring your own toilet tent . Be responsible and aware to protect yourself by using anti bacterial wipes on door handles and contact areas. 4. Bring your own hand towels, toilet rolls or “ bio degradable wipes” soap and water. 5. Please take home or burn any paper towels and non bio degradable wipes, masks, 6. Pay in advance (bank transfer). 7. Part of the risk assessment asks that:- a) you cancel a booking if you have symptoms of covid. b) you notify us after any visit if any in your group becomes ill during or just after your visit, so we can assess any extra sanitising needed, etc. c) on booking, provide contact details.

Facilities and what to bring

No motorhomes/caravans or campervans No party groups. No visitors. No dogs, No gathering wood. Bring your own anti bacterial wipes for gate, handles, rubbish bags, toilet bin liner for sanitary waste, etc. Limited rustic facilities:- Compost toilets - please bring own toilet tissue or bio degradable wipes. Water opposite reception - bring a refil container, disinfect hands before using tap. No hot water or showers (sports centre 2 miles.) No WiFi. Just back to nature. All rubbish:- Please take your tins, bottles and all rubbish home as we can no longer recycle your waste, including toilet bin waste.

For a few years we have reduced the number of tent pitches and toilets we have to maintain. Anything you can do to help, like bringing your own logs or toilet tent or gas and stove for the cabins is great. (UKCampsite.co.uk do not have our permission to list us without our blog showing up to date information. There may be other listing sites that are still displaying out of date information.) This blog superscedes all listing sites. Updating our blog is ongoing, some posts may still need to be updated.

Promote your Page too

BBC weather at your campsite